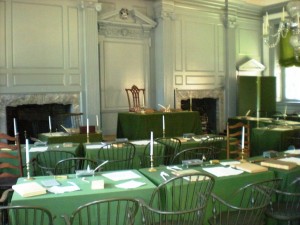 Everyone loves a room with a view, one that overlooks a beautiful harbor, a quaint villa or a mountain range. But one room has arguably the best view in the world, and you can visit it for free. It’s the assembly room at Independence Hall in Philadelphia, with its wood floors, high ceiling, simple chairs and tables. But the spectacular view isn’t out the large windows.

In this room, in the summer of 1776 and in an uncertain time, ordinary citizens like you and me, struggled and argued about their future. Today, we call them “founding fathers.” But they were activists, revolutionaries who debated then signed (at risk of death) a declaration of independence from a tyrant across the ocean. In signing their names, they launched the American experiment in democracy. After a long war, the colonists prevailed. And during the hot summer of 1787 a group again gathered in that room to hammer out a structure to bind the 13 independent states into one nation.

From the start, this North American democracy experiment was flawed: written by white men of privilege, the Constitution structured a government that protected the “peculiar institution” of slavery. To keep them on board, it gave less populated states disproportionate power (creating challenges that still impact us). Women couldn’t vote. For electoral purposes, each slave counted as three-fourths of a person. Of course, they couldn’t vote and were considered property. Plenty was egregiously wrong.

It baffles me to hear people talk about the Constitution as though Moses had brought it down from the mountain, inerrant, direct from God. (These are often same people who presume to know what the founding fathers believed about issues that wouldn’t arise until two centuries later.) People! It was a bunch of folks doing the best they could, under extreme pressure, in a different time! They did pretty well, but it wasn’t flawless.

Imperfect as it was, somehow, they got a great deal very right. What gives this room its spectacular view is its long look. Over time, people of this nation have been in a nonstop struggle, often very bloody, to bring to each person the ideals that got listed on the two documents signed in this room. We still struggle to implement such notions as “we the people,” “promote the general welfare,” “all men are created equal,” “unalienable rights” of “life, liberty, and the pursuit of happiness.”

I’m convinced that those in Independence Hall would be shocked to see the long tail of their deliberations (I know the slaveholders in the room would be shocked). Over time, this American experiment inspired movements among people across the planet. It still does. But those of us who live in the United States can now find plenty of inspiration from people in every corner of the world who have bravely struggled for freedom, rights and justice. There are thousands of examples; another room to see is the small prison cell where Nelson Mandela spent 18 years for his fight against apartheid.

The good news is that this very day there is such a room near each one of us — a room where citizens are struggling to overcome some injustice, trying to create a better society. You can’t watch the news tonight without seeing them. Each of us is needed in these rooms. And while we are not obligated to get it perfect, we are obligated join in, to be engaged, to make our part of the world better. To create a new room with a view.

Nonprofit Helps 26
100 Ways to Improve Something!

One Response to A Room with a View