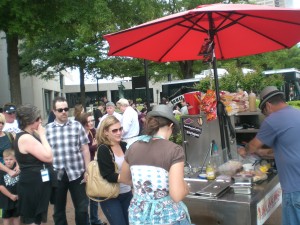 Besides my marketing and strategy work with nonprofits, I volunteer with a few groups. Longest running of these is the effort to revitalize downtown Little Rock. First as a board member of the Downtown Little Rock Partnership; and more narrowly, on the mayor’s task force to revitalize Main Street; and more narrowly still, the “Entertainment Committee,” which narrows even more to co-chairing a Food Truck Festival.

Around the seventies, most downtown businesses fled to the suburban malls and strip malls. So for the last few decades, Main Street has been almost dead. But a steady effort from some passionate folks is moving the street toward becoming the focal point of a vital downtown. And the momentum is gaining.

Our committee’s goal: hold some kind of happening, get people to the street. The last event there was in 1992 when President Bush (the dad!) made a whistle stop at Capitol and Main — I suppose, a symbolic gesture in the heart of Clinton territory.

Early on, we landed on the idea of a food truck festival. It wouldn’t cost much, food trucks are cool, we could get some local bands, find some artists to sell their work. So the small group (including fantastic DLRP staff) scheduled the first one for last October. We lined up 18 trucks, got interest from the media, rounded up a few pioneering sponsors, set up a Facebook page that quickly gained 1,000 likes (we had to reboot the page for this year).

The day came, and the weather was fantastic. Of course, we had a great location — the street is lined with oak trees and nice old buildings. And The Rep, Little Rock’s wonderful theatre that has anchored the street for so many years, held a giant sale of 10 years worth of costumes, just in time for Halloween.

The festival was slammed! More than 5,000 hungry people showed up; some trucks ran out of food by early afternoon. Many people were in lines an hour-and-a-half. The bands played into the evening. And despite the waits, folks generally had a great time, saying they’d be back for the next one.

So, to build on that, today we held our first weekly Food Truck Friday. Again, great weather, and several hundred people showed up to get their lunch from Hot Dog Mike and a couple of trucks. While it’s not much, this weekly lunch happening will add to the steady and growing energy on Main Street.

Sometimes, the best strategy is just make your best guess about what might work and doesn’t cost much — and simply get started.