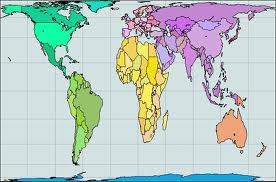 In 1984, I wrote an article for Seeds magazine titled “Is El Greco Making Maps?” It was a reaction to a new map developed by Arno Peters. What follows, borrows a bit from that piece.

In the mid-1980s a map appeared that looked like something straight off El Greco’s easel. It evoked emotions I hadn’t felt since 1959 when Alaska joined the Union. I was a kid, and until that time we Texans lived in the largest state. We were proud of it and it gave my brother and me ammunition against our Maryland cousin in the which-state-is-better argument. She had us in history (original colony, the national anthem was not written at the Alamo, ad nauseam). But this trumped all: Texas was the biggest, and biggest was best.

Three decades ago global northerners faced a similar ego challenge when cartographer Arno Peters introduced his new world map. Almost all world maps to that point were based on the work of 16th century cartographer Gerardus Mercator. 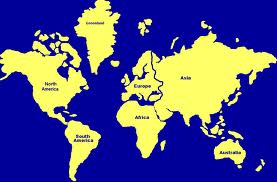 Because the world is round, mapmakers have to choose between various qualities for their flat maps. One might be faithful to area, but at the cost of, say positions of various places. Another may be true to positions and area, but the map is hard to understand. Mercator chose to have “angularity,” but at the expense of faithfulness to areas.

And then for some strange reason, he placed Germany (his home) in the center of his map, even though Germany is really in the globe’s northern quarter. This resulted in great distortions of size, shape and position of countries and continents. Yet for centuries, Mercator’s map and its derivatives have dominated. They still lurk behind some television news commentators, at the front of the schoolroom and in our minds.

How are they distorted? In the old Mercator maps, Scandinavia, for example, appears larger than India. In fact, India is three times larger. Greenland appears the same size as Africa, which is actually 14 times larger.

What difference does it make which map we use? For one thing it helps form our worldview; Peters pointed to an earlier opinion poll that found “94 percent of those questioned accepted that representation of the globe shown by Mercator … maps as being the actual, undistorted picture of the world.”

I did a quick poll of my own just now by typing “world map” into Google image search. You don’t see many of the straight astigmatism/El Greco-looking Peters Projections. But of the first 100 maps, half appeared influenced by Mercator, half by the Peters valuing of area. Is this a giant shift in 30 years? Or should we have come further by now? (That in 1984 Peters spoke of white man is itself outdated, but that’s another story.)

What habits influence our perceptions? Our choice of words, images, even maps influences and frames our own worldview.

• Is that thing growing in your lawn a weed or a forb?
• Do we man or staff the volunteer booth?
• Are we talking about gay marriage or marriage equality? Gun control or gun safety?

Post-impressionist Paul Gauguin said, “Out in the sun, some painters are lined up. The first is copying nature, the second is copying the first, the third is copying the second… You see the sequence.” As we try to understand the issues we work with, are we merely the third or tenth painter? Or do we struggle to look freshly, to see them for what they really are?

In Getting a Grip, Frances Moore Lappé addresses this question:

In the late nineteenth century, for example, Indians outnumbered the British civil servants ruling them by three hundred thousand to one. Yet Indians’ widespread belief in their powerlessness continued until Gandhi and others re-framed reality, revealing the power that was theirs all along. In 1930, Indians declared independence and, sparked by Gandhi’s example, thousands walked over two hundred miles to the sea to protest the British salt tax. Within seventeen years, the Indian people had ousted their colonial rulers.

It’s pretty easy to see how mental concepts — ideas about reality — disempower others, whether it’s a belief in a ruler’s “divine right” or a conviction about the inferiority of a lower caste. It’s much harder to perceive the mental straightjackets we ourselves don every day.

Our future, though, may well depend on giving it a try.

“The real voyage of discovery consists not in seeking new landscapes but in having new eyes.” – Marcel Proust

Nonprofit Helps 16
Why Climate Change is Not an Environmental Issue