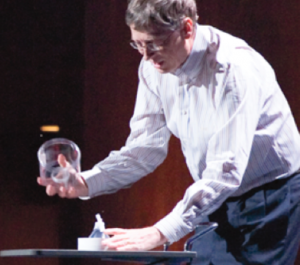 Nancy Duarte has worked on thousands of presentations, most notably Al Gore’s An Inconvenient Truth. In her book Resonate she draws on the speeches of Joseph Campbell, Martin Luther King, Martha Graham, Abraham Lincoln and Steve Jobs to show what makes a presentation powerful and compelling.

Duarte tells us to drive home our big idea with a STAR (Something They’ll Always Remember) moment. “This moment should be so profound or so dramatic that it becomes what the audience chats about at the water cooler or appears as the headline of a news article.” Duarte says that these moments can come in a variety of formats:

Memorable Dramatization: Small dramatizations convey insights. They can be as simple as a prop or demo, or something more dramatic, like a reenactment or skit.

Evocative Visuals: A picture really is worth a thousand words—and a thousand emotions. A compelling image can become an unforgettable emotional link to your information.

Emotive Storytelling: Stories package information in a way that people remember. Attaching a great story to the big idea makes it easily repeatable beyond the presentation.

Shocking Statistics: If statistics are shocking, don’t gloss over them; draw attention to them.

Whether reaching out online or sending a fundraising letter, your audience is busy and the other chatter is loud. You don’t want your message to go in one ear and out the other, but get stuck in that brain between. It can be done. In an act of civil disobedience to protest British rule Gandhi marched to the sea and produced salt. A former president (Jimmy Carter) is out in the sun hammering on someone’s house? To protest unfair taxes revolutionaries threw boxes of tea into the Boston Harbor. And activists in the sixties burnt bras and draft cards to say no to the establishment.

While you don’t have to risk jail time to get your message across, what’s that one image about your cause that could create a memorable moment? What’s the jarring, head-turning concept that supports your big idea? Duarte describes Bill Gates speaking on malaria and releasing a jar of mosquitoes into the TED conference room. (200 million suffer from the disease, there’s no reason only poor people should experience it!) She describes Steve Jobs pulling the thin MacBook Air out of an inter-office envelope.

(A STAR moment that didn’t go well: The Republican Convention was going great in August 2012. Then Clint Eastwood got up and flummoxed the crowd and national audience by talking, like a crazy man, to an empty chair.)