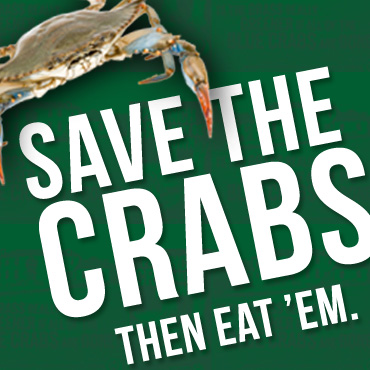 Save the Crabs. Then Eat ‘Em!

A recent news item gave me reason to cheer: a study found that the Chesapeake Bay dead zones are coming back to life. Dead zones happen when nutrient pollution, especially chemical fertilizers, deplete the oxygen, killing of much off marine life. The bay is coming back because of programs to reduce fertilizer, animal waste and other pollutants. 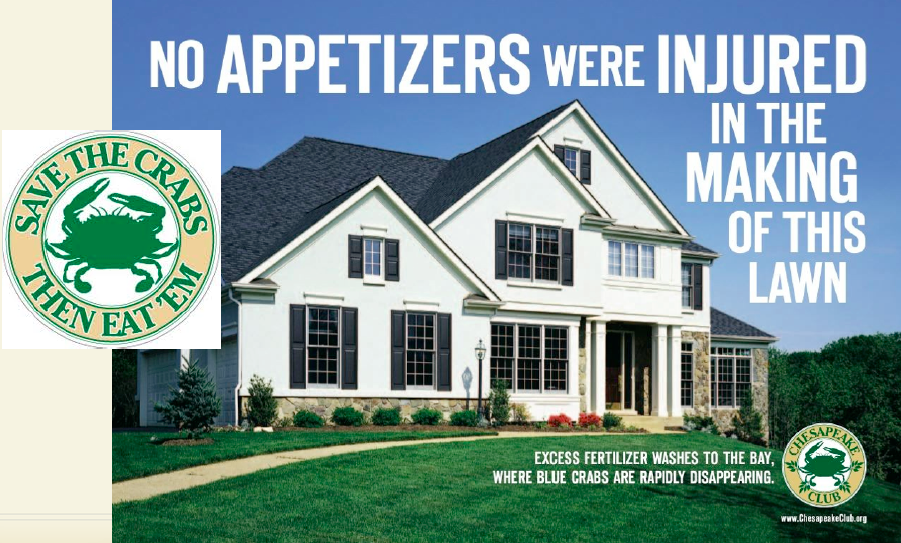 The most creative of these is a campaign that gets people who live around the bay to change when they fertilize their lawns. Lawn fertilizer runoff was having a devastating impact on the bay’s ecosystem. If residents simply switched from fertilizing their lawns in the spring when the heavy rains washed much of the fertilizer into the bay.

In Social Marketing, Nancy Lee and Philip Kotler tell about an effort that cut the pollutants running into the bay. “Lawn care partners were a critical part of the strategy. Messages to fertilize in the fall would fail if there was no fertilizer available in the fall,” they reported. And the companies were convinced to join up. Brochures, ads for both print and television, and a website and were developed explaining the campaign.

The campaign was branded as the Chesapeake Club to create a sense of membership, participation, and practice of a behavior that is the accepted social norm…. Mass media messaging focused on “wait until fall to fertilize.”

The Chesapeake Club reframed the issue as culinary, focusing on the iconic Blue Crab. They engaged with local lawn care companies, restaurants and others to encourage the club’s clever “Save the Crabs. Then Eat ‘Em” campaign. That slogan was printed on drink coasters:

…and distributed without charge to local seafood restaurants, to use and hand out to patrons. The coasters sported the “fertilize in the fall” message on the back, and waitstaff were informed regarding the purpose of the campaign and why fall fertilizing is more environmentally sound. In this way, restaurants also  became partners in disseminating the campaign message and, as an extra incentive, were also promoted on the campaign Web site.

All of this was taking place alongside a media blitz. The results were measured and the campaign was considered successful in raising awareness and getting a number of residents to switch from fertilizing in the spring, thus reducing pollution in the bay.

If you’re trying to create social change, working on any worthwhile cause, it has to be more than you can handle alone. Partners will share the burden and bring to the effort assets you don’t have, creating greater possibility. Most exciting, the chemical reaction of the different agents often creates some entirely new, unanticipated result that takes the work to a higher level. An African proverb says, “If you want to go fast, go alone. If you want to go far, go together.” Once you know where you want to go to create social change is ask, who else might want to go there? Who else could benefit from the journey?

Of course, not all partners make sense. For example, you may not want to join up with certain companies and lend them false legitimacy. You may have reasons not to work with a government agency or a competitor. Some groups you’d want to avoid. Or you may view working with a less-than-stellar partner as freeing funds and energy for a good cause that would otherwise be lost. Frederick Douglas said, “I will unite with anyone to do good, but with no one to do harm.” You’ll have to find your right place on this. 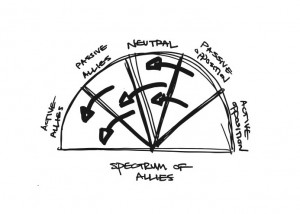 Be creative and open minded about potential partners. In Beautiful Trouble Joshua Kahn Russell says that it helps to think of a spectrum of potential allies. “Successful movement-building hinges on being able to see a society in terms of specific blocs or networks, some of which are institutions (unions, churches, schools), others of which are less visible or cohesive, like youth subcultures or demographic groupings.” Russell points to a “spectrum-of-allies analysis” that is useful in developing a strategy.

In exploring partnerships, ask what are you seeking in an ally? What do you have to offer them? Is this potential partner really good at what they do? Are they the best you can find? Once you’ve identified a potential ally, do due diligence. Are you both in sync in terms of values and ethics? Be clear about your goals and who is going to do what. Draw boundaries and have an exit strategy.

A retirement center and a school

At first glance, a retirement center and an elementary school may seem like an unlikely pair. Those helped by each institution differ vastly in age, health status, and life experience. Yet, anecdotal evidence suggests that partnerships between the two can be mutually beneficial.

In his book The Element (written with Lou Aronica), Ken Robinson tells of a retirement center owner in Jenks, Oklahoma, who offered to help kids in the elementary school across the street. With the school district’s consent, he set up a glass-walled preschool/kindergarten classroom in the lobby of the center. The program paired an elderly resident with a child for one-on-one activities where each reads in turn. So far, the results have been surprising: The elders are finding something to look forward to when they get up in the morning and are taking fewer medications. And the children have greatly improved their reading abilities. Equally important, Robinson says the program “has restored an ancient, traditional relationship between the generations. The very young and the very old have always had an almost mystical connection.”

What happened to make this possible? The retirement center and school were both untapped community assets that, when aligned, achieved powerful results for each institution and the broader community.

This win-win between students and elderly people doesn’t have to stop in elementary school. In Deventer, Netherlands, six college students live rent-free in a retirement home alongside 160 residents. Anne-Marie Botek, writing in AgingCare, describes the scene:

In exchange for free living space, the students have to keep the noise to a minimum and spend at least 30 hours each month helping their fellow residents. “Their assignment is to ‘be a good neighbor,’” says [director Gea] Sijkpes, who now gets letters and messages from hundreds of students who also want to live at Humanitas. Somewhat surprisingly, many of the older residents were on board with the concept of young students living among them from the beginning, according to Sijkpes. Even so, each college-age candidate is thoroughly vetted and must undergo a temporary trial period before being allowed to officially move in.

Sijkpes says the program has helped create “the warmest and nicest nursing home of Deventer.” One student, reports Botek, “developed such a deep connection with one of the older women in the community that she asked the woman to be the flower girl in her wedding.”

The idea has crossed the Atlantic. Students at the Cleveland Institute of Art exchange free housing for art therapy at Judson Communities.

“Alone we can do so little; together we can do so much,” said Helen Keller. The right social change partners can move a cause far beyond where it could have otherwise gone.