As one who walks for exercise, I’m often surprised when places I used to think were so far away are, in fact, walkable. That’s why I like this guerrilla wayfinding effort. 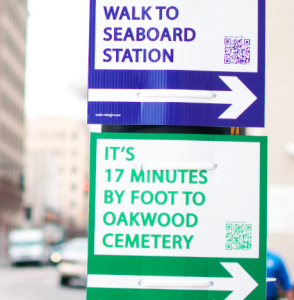 Urban planning student Matt Tomasulo founded Walk [Your City] based on signs that simply say, “It’s a __ minute walk to [destination].” The first 27 signs went up in Raleigh, NC, in 2012. And they’ve spread to 45 states and almost as many countries.

After successful program in Raleigh, and some media-generated enthusiasm in other parts of the world, Tomasulo launched a Kickstarter to help other communities have their own signage campaigns. He developed an online process where people anywhere can write how many minutes it takes to walk to a certain destination. Walk Your City creates and ships quality signs that are placed on the streets. The signs can be scanned for directions. 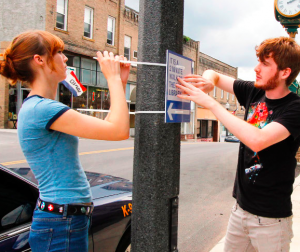 Groups who want to create healthier communities or revive their cities should especially take note. What’s a cheaper, faster way to improve health than getting people onto the sidewalks? What’s better for a neighborhood than walkability?

Tomasulo says on Talking Walking Podcast that while cities often take years to create such signage campaigns,, through walk your city, citizens can create 50 signs in a fraction of the time for as little as a few hundred or thousand dollars, as opposed to a couple of million.

Walk Your City: Power to the Pedestrian

Say the folks at Walk [Your City], “Road signage has traditionally been expensive and car-centered, leaving walkers and bikers by the wayside. Walk [Your City] lets anyone from citizens to corporations quickly and affordably promote healthy lifestyles, public safety, and human-centered transit.

Jeff Speck, author of Walkable City, is an adviser to the group. You can see more about his book and work in an earlier post here.