By Tom Peterson on October 9, 2013 in Innovation, Social Change

Local Power—David and Goliath. At stake is a highly-visible attempt of a local community to determine its own future for power. Mostly local, renewable power. At stake: can any U.S. community shift from abetting the climate change disaster to creating a solution. A couple of years ago, citizens of Boulder, Colorado, took on the snail’s pace of change from the corporation that supplies their power. Ben Schiller writes in a post for Fast Company’s CoExist: 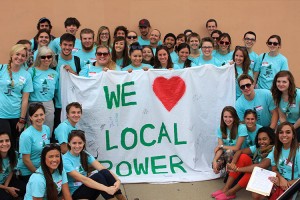 Back in 2011, Boulder voted through a ballot measure allowing the city to study the idea. The measure said the city could go ahead if an independent analysis found it could produce more renewable power than currently, and do it reliably and at less cost. That analysis came up positive. It said a new utility could double renewable production and cut emissions by half, without adding to people’s bills.

The ballot this November would very likely put a wrench in those plans, [Steve] Fenberg says. It would force the city to get voter approval before the utility could issue debt to buy Xcel’s infrastructure, place tight limits on fees the city could pay to brokers to arrange financing, and add other burdens.