In case you missed it, here is President Obama’s eulogy for Nelson Mandela. You can get the full text here from The Daily Beast, but below are a few excerpts. Thank you, Nelson Mandela!

“Mandela understood the ties that bind the human spirit. There is a word in South Africa- Ubuntu – that describes his greatest gift: his recognition that we are all bound together in ways that can be invisible to the eye; that there is a oneness to humanity; that we achieve ourselves by sharing ourselves with others, and caring for those around us. We can never know how much of this was innate in him, or how much of was shaped and burnished in a dark, solitary cell. But we remember the gestures, large and small – introducing his jailors as honored guests at his inauguration; taking the pitch in a Springbok uniform; turning his family’s heartbreak into a call to confront HIV/AIDS – that revealed the depth of his empathy and understanding. He not only embodied Ubuntu; he taught millions to find that truth within themselves. It took a man like Madiba to free not just the prisoner, but the jailor as well; to show that you must trust others so that they may trust you; to teach that reconciliation is not a matter of ignoring a cruel past, but a means of confronting it with inclusion, generosity and truth. He changed laws, but also hearts.” 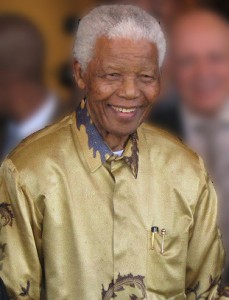 “…in America and South Africa, and countries around the globe, we cannot allow our progress to cloud the fact that our work is not done. The struggles that follow the victory of formal equality and universal franchise may not be as filled with drama and moral clarity as those that came before, but they are no less important. For around the world today, we still see children suffering from hunger, and disease; run-down schools, and few prospects for the future. Around the world today, men and women are still imprisoned for their political beliefs; and are still persecuted for what they look like, or how they worship, or who they love.

View all posts by Tom Peterson →
How to Write Killer Talking Points
Use What You Have, Ted Talk