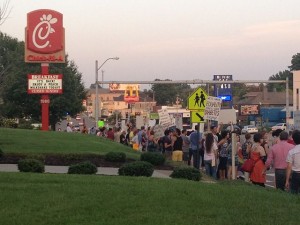 Around 1969 when I was a teenager living in Corpus Christi, Texas, I helped open the first Chick-fil-A west of the Mississippi River. I worked there several years, occasionally wandering the mall in a chicken suit passing out coupons for free ice cream. (You decide whether I’m bragging or looking for sympathy!) Every once in a while, founder Truett Cathy would drop by. That was a big deal.

Should I eat that chicken sandwich?

Fast forward to 2012 when his son and now Chic-fil-A president, Dan Cathy, commented on a Christian radio show about same sex marriage:

I think we are inviting God’s judgment on our nation when we shake our fist at Him and say, “We know better than you as to what constitutes a marriage.” I pray God’s mercy on our generation that has such a prideful, arrogant attitude to think that we have the audacity to define what marriage is about.

This was followed by reports that the family’s foundation had donated millions to political organizations that oppose LGBT rights. This created such a stir that in the days following millions of Americans felt obligated to make a choice: support his sentiments and go buy more Chick-fil-A sandwiches or show their disapproval and shun the chain.

Shortly after, mayors and politicians in cities like Boston, Chicago and San Francisco began suggesting that with such sentiments, Chic-fil-A expansion may not be welcome. Some college students began demanding the restaurants to be kicked off their campuses. The Jim Henson Company pulled back from a partnership saying they work only where diversity and inclusion are honored. LGBT rights groups organized “kiss-ins” at local Chic-fil-A’s.

On the other side, the ACLU defended Cathy’s right to express his opinions. And former governor Mike Huckabee called for a Chic-fil-Appreciation Day to show support for the company. The stores saw record sales.

This polarizing event invited ordinary people to take sides by eating or not eating food from the restaurant.

The boycott and the procott

In the 1760s Americans began boycotting certain goods from England, a protest that ultimately included the Boston Tea Party. The “boycott” was named a century later in 1880 for Captain Charles Boycott, the agent for an unfair absentee landlord with whom Irish renters (joined by others in the area) refused to have any dealings. In recent decades, people have found reasons to boycott California grapes, Nestlé, Denny’s, Taco Bell and many others.

Then there’s the procott. The opposite of a boycott, (according to a coordinating website that seems to have disappeared) a procott “is a movement to support the production and purchase of earth-friendly and justice-friendly goods and services.”

I first ran across the term in Utne Reader’s “Good Idea” contest in 2002. Instead of not buying products as a protest, procotts encourage people to buy products and services that help bring about good. Don’t ride the bus in Montgomery in 1956, do procott and take the bus in 2012 because it’s better for the environment and community. Over the last few decades, opportunities for people to procott or participate in a more eco-just economy have skyrocketed.

Something happened to the word procott; a web search finds almost nothing, just a few blog posts and a dog shampoo. It’s like someone sent out a “cease and desist”—the dog shampoo people!? Or maybe it just didn’t take. I like the term and we should use it. It’s the alternative to unconscious consuming. When we tune in to the effects of our buying power we help create a better world.

Can a few small actions combine to create great shifts in our systems? They can and do. We help create our future world every time we open our wallet—when we pick a laundry soap, decide which gas station to fill up at, pick a neighborhood to live in, buy food, buy a shirt. With each purchase we impact we the global economy. And with many of those, we can by habit boycott or procott.

Consuming responsibly we can improve the environment in our own areas and as far away as Indonesia (think palm oil). We can help end discrimination (think Chic-fil-A with same-sex discrimination and Denny’s with racial decimation). Obviously, we have to be informed. Is it really helpful that for a short period of time a tiny share of your purchase from KFC goes to the Susan Komen Foundation (that had its own challenges trying to cause trouble for Planned Parenthood)? 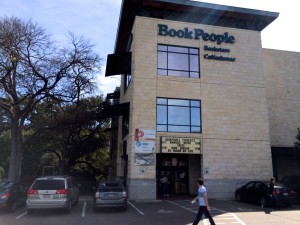 And by shopping with “local” in mind, we can cause more money to flow to the 99 percent. Here are some thoughts I wrote about this a couple of years ago:

Why does spending more of our money locally matter? It builds a more robust, resilient economy. It spreads the wealth.

In 2002 a small coalition wondered about the impact to Austin, Texas, when Borders wanted to plop one of its bookstores right down at the same intersection as Book People (one of my favorite local bookstores in the country) and Waterloo Records (my sons would drive 10 hours from Little Rock just to go there). The city was considering more than two million dollars in incentives to help the chain with its new location when an economic impact study found that of $100 spent at Borders, $13 stayed in the local economy, while of $100 spent at Book People or Waterloo, $45 stayed in the Austin economy.

And what of the other impacts had Borders driven these two great stores out of business before it went bankrupt itself?

We’re going to buy transportation, housing, food, clothes anyway. Why not be just a bit more thoughtful about where and how we buy them. Giant world change can happen because of millions of individuals make small choices each day.