By Tom Peterson on August 16, 2014 in Innovation, Nonprofit Innovation 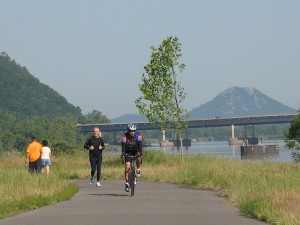 Every day fleets of trucks wend their way through our towns and cities. Their giant claws reach out to grab the heavy waste bins. They are denizens of our throwaway world. Almost half of our harvested food, millions of tons of plastic, entire neighborhoods. It’s sad to see so much still discarded.

So it’s encouraging when something discarded is repurposed.

I recently became aware of a connection between a river trail I walk in Little Rock (pictured above) and some wonderful wooded paths I walk in Winston-Salem. It turns they’re both converted rail lines. How did these come about?

As a kid in the 1960s, David Burwell was inspired by his mother’s effort to create the Shining Sea Bikeway on Cape Cod. Then, in the 1980s, federal legislation made it easier for railroads companies to abandon tracks. And it helped groups that wanted to convert these lines into trails for the public use. This caught the attention of Harnik, Peter Burwell and others who began attending a monthly brown-bag lunch in Washington, D.C., to explore the possibilities. In 1986 Burwell and Harnik founded Rails to Trails Conservancy, RTC, to help communities bring imagined dreams of both urban and connecting trails into reality. 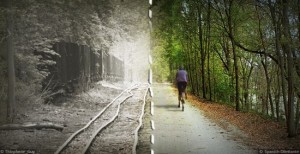 To find converted trails in your community go here.

Something old, something new

Repurposing is an ancient tradition—animal bones became valuable tools and weapons. In a time of scarcity, scraps of cloth were sewn together into warm, colorful quilts. Used clothing converts into much hipper “vintage” clothing. As needs changed, the car’s cigarette lighter became an electric charger. Old military bases were repurposed to new uses, such as Austin’s airport and the Presidio in San Francisco. And buildings get green “points” for old materials that are repurposed in construction.

For years, Goodwill, The Arc, Habitat for Humanity’s ReStore, Big Brothers Big Sisters have repurposed our clothes, furniture and other stuff. And they’ve created jobs, reduced our landfills and raised funds for worthy causes.

If one person’s trash is another’s treasure, what can your cause or nonprofit creatively repurpose? What can you see that the rest of us don’t?

Repurposed abandoned bridge over the Hudson

I like this video of Fred Schaeffer who spent two decades—mostly convincing others, then 18 months in construction—creating the spectacular Walkway Over the Hudson Trail in Pouhgkeepsie, New York.

View all posts by Tom Peterson →
World Building for a Cause
Do it Differently: San Antonio’s Mental Health Squad