By Tom Peterson on February 1, 2018 in Nonprofit Innovation, Social Change 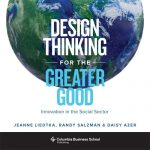 Design Thinking for the Greater Good: Innovation in the Social Sector

Link to the Book.

As far as I know, Design Thinking for the Greater Good is the only book that focuses on design thinking for social change. The authors, Jeanne Liedtka, Randy Salzman and Daisy Azer, have combined the theory of design thinking with a remarkable gathering of case studies. And it’s a combination that makes sense.

In facing challenges both obviously large (fighting hunger and poverty, encouraging sustainability) and seemingly smaller (getting invoices paid on time, increasing blood donations, decreasing hospital patient stays), social sector innovations are deciding that design thinking has the potential to bring something new to the conversation. They are bringing together people who want to solve a tough problem—not hold another meeting—in a world where forming a committee can be seen to count as action.

The authors see design thinking as a movement, much like the Total Quality Management (TQM) movement. But where TQM “was seen as the domain of a small group of experts,” in design thinking “the search for opportunities to innovate is everybody’s job, so everybody designs.”

The heart of the book is storytelling, how a dozen organizations from Ireland to Australia and South Texas used design thinking to grapple with and address a variety of “wicked problems.” And these tough, complex social challenges that connect with other tough challenges are perhaps best addressed with this approach.

What is design thinking? “It’s a process that we hope will lead to cultural change in how people address problems,” says co-author Randy Salzman. “Design thinkers explore deeply, emphasize continually, ideate rapidly, prototype simply, and iterate constantly. We hope that we see more businesses, but especially non-profits and governments, get away from the command-and-control system that most of them have to this approach.”

I recently interview Salzman, so I’ll let him tell of a group that used design-thinking and came out with something that made a difference:

While Design-Thinking for the Greater Good is the “why”—why an organization should consider adding design-thinking to their problem-solving toolkits a second book, Designing for Growth Field Book, is the how-to.

View all posts by Tom Peterson →
10 ways to be audacious (and change the world)
Tererai, the improbable story of Oprah’s “favorite guest”