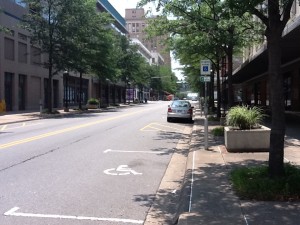 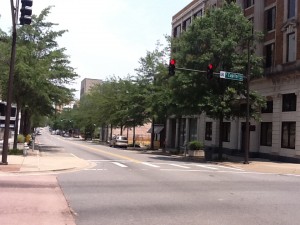 How is innovation part of reclaiming an urban core? It may not look like it now, but in not too many years, Little Rock will be home to the world’s coolest Main Street. It’s going to take some creativity.

I took these photos, looking north and south from Capitol, the very heart of downtown, on a weekend day last summer. You can tell by the shadows that it’s mid-day, but it’s empty (one of those two cars is mine). Absolutely nothing going on!

What these pictures don’t show is the energy surrounding the street’s rebirth. You do see some nice old buildings, trees, a wonderful scale that’s screaming to attract offices, stores, galleries, cafes and residences.

Two clusters of energy are focused on this. First, the mayor’s task force to revitalize Main Street focuses on the street north of the interstate that so divides Little Rock. A few developers are beginning to take on some of the empty buildings. We’ve got a new jazz club, and construction will soon start on a $20 million mixed-use project, the Mann Building. Serious “art district” conversations are taking place.

And south of the interstate, SOMA (south Main) seems to have more youthful and creative energy. It’s becoming one of the Little Rock’s most walkable neighborhoods, but still just getting started. Already, it has two bakeries and a little retail (we just got ice cream last week). And the office of Oxford American just moved in with plans for a southern restaurant and an eclectic mix of entertainment and community gathering.

On Saturday morning, May 5, (9-12) we’re holding an Idea Generation session at Oxford American. With a couple of Clinton School students facilitating, we’ll gather whoever’s interested to share ideas on how to make it happen quicker and cooler. (They’ll be using “Liberating Structures” to facilitate — more about that in a future post.)

We’ll be looking at two things: First, what can we do that’s “lighter, quicker, cheaper” for some early, fast gains. Second, what’s the most outrageous idea we can imagine? Austin built an 8-story wind-powered icebox and offered free air conditioning to developers who would build in their empty downtown. It’s now full of tall residential buildings and full of life. What’s some crazy idea of that ilk?

If you’re a Little Rocker, join us. RSVP through tom@thunderheadworks.com