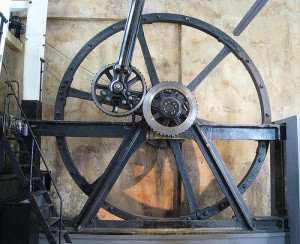 Collins asks us to picture a giant “massive metal disk mounted horizontally on an axle, about 30 feet in diameter, two feet thick, and weighing 5,000 pounds. Now your task is to get the flywheel rotating on the axle as fast and long as possible.” You push hard, it takes a lot of energy to get it moving a little bit and after great effort the flywheel makes one rotation. And you push again and again, it’s still hard. After a while it’s a bit easier, it seems to spin on its own at a high speed.

The gift catalog had been at Heifer since the 1970s. But Heifer got little benefit from it. It wasn’t until we began a long series of improvements that over many years got the wheel spinning fast enough to increase our revenue by $5 –10 million each year.

These qualitative changes over many years made the catalog the driver for Heifer’s growth—so much more than any single breakthrough idea. Each year, we made significant pushes on what the catalog looked like, what it contained, how we produced and distributed it, how we publicized it. I once made a list of the significant changes we made, it was about two dozen. We added celebrities’ photos and quotes, an innovative data process that helped us mail to people who were more likely to donate, and so on. Each single improvement (once we tested and proved it) was another push on the flywheel.

And together they caused the catalog program to spin faster each year. By doing this over time, we grew fund raising from the catalog from a few hundred thousand dollars to tens of millions.

The flywheel image captures the overall feel of what it was like inside the companies as they went from good to great. No matter how dramatic the end result, the good-to-great transformations never happened in one fell swoop. There was no single defining action, no grand program, no one killer innovation, no solitary lucky break, no wrenching revolution. Good to great comes about by a cumulative process—step by step, action by action, decision, turn by turn of the flywheel—that adds up to sustained and spectacular results. — Jim Collins

It’s more than coming up with that one idea, that one lucky connection. It’s showing up day after day, year after year and incrementally improving. Work for the long haul. Think  years. Wendell Berry tells us to plant sequoias.

Sarah Durham on the Flywheel at Big Duck.