March 31 is Cesar Chavez’s birthday. Celebrate this week by seeing the new movie—in a theatre near you!

Meanwhile, Danielle Nierenberg, at foodtank suggests five things we can do to honor Chavez’s legacy: 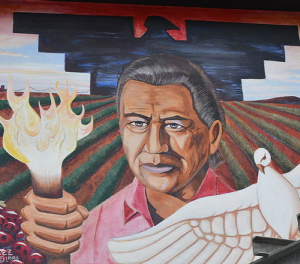 1. Raise the U.S. Minimum Wage for Restaurant Workers (and all Tipped Employees)

2. Support Farmers Across the United States

3. Support Meat Packing and Processing Workers in the United States

4. Make the Transportation of Food Safer

Learn why these steps are important on Daniell’s post.

And now some words from Cesar Chavez:

“When you have people together who believe in something very strongly – whether it’s religion or politics or unions – things happen.”

”Our opponents in the agricultural industry are very powerful and farm workers are still weak in money and influence. But we have another kind of power that comes from the justice of our cause. So long as we are willing to sacrifice for that cause, so long as we persist in non-violence and work to spread the message of our struggle, then millions of people around the world will respond from their heart, will support our efforts…and in the end we will overcome.”

“You are never strong enough that you don’t need help.”