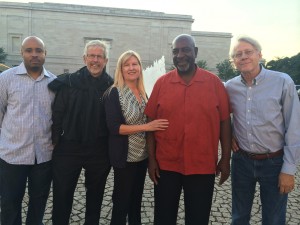 What could be more boring, less likely to move us to action than a fact? There’s no such thing as an inspiring statistic. Right?

In her book Resonate, the best book out there on presentations, Nancy Duarte tells us to create S.T.A.R. moments. That is Something They’ll Always Remember. One STAR moment is when Bill Gates released a jar of mosquitoes into the audience of a TED talk.

Occasionally, this can come from a statistic. A great example is when Al Gore got on a cherry picker to show the growth of carbon dioxide and global temperature in his Inconvenient Truth talks. (By the way, Duarte helped develop those.)

Let’s be clear. Almost every statistic is dreadfully boring. You shouldn’t should use them to try to persuade us of anything. However, as Duarte suggests, one opportunity for a STAR moment is when you’ve got a really shocking statistic. Then look for a way to use it to help us remember your case.

The Occupy Movement used statistics. Their message compared the one percent to the rest of us: We are the 99%. Among the statistics that came from this campaign, they pointed out that the top 1 percent of Americans owned 34.6 percent of the total wealth before the Great Recession. That number grew to 37 percent after. They successfully injected the wealth disparity into the 2012 election. When Mitt Romney’s 47 percent comment came out, the context was already there. Occupy Wall Street’s helped create a turning point in the election’s outcome.

But here’s what first caught my eye:

Early in the Occupy movement someone created an effective, no-cost vehicle to “circulate” an understanding of how wealth is spread. A simple online printer template, a color printer and a few dollar bills, and Occupy sympathizers have effective guerrilla marketing infographic brochures.

The richest 400 Americans hold as much wealth as the bottom 150 million. That’s a shocking statistic. Its presentation makes it an inspiring statistic. Makes me want to get more involved in wealth equity.

A simple fact about gun violence

I still remember a presentation from more than two decades ago. I don’t remember the actual statistic, but I remember the point. It was Fred Smith (top photo in the red shirt, that’s me to the right. This picture is just last week, so we’ve aged a bit.).

In the early nineties, Fred was presenting at a conference on public health at the Carter Center. He was talking about the difference between blacks and whites when it comes to gun deaths in the United States. The information was from Mark Rosenberg of the CDC. I don’t have the slides, but he first showed a bar chart that compared countries. It looked something like this chart from Statistics Canada:

This is a contemporary chart, but the ratio hasn’t changed that much. The U.S. is definitely number one! Compared to other countries, our level of gun homicides per capita is insane. This shocking image should sway us to help end the unnecessary violence.

But then Fred continued: let’s now compare these U.S. numbers by race. He showed one slide that looked like the one above. It showed a top bar for homicide deaths of whites. It was short. A second bar for blacks went all the way to the edge of the slide.

The number of per capita homicide gun deaths was (and still is) roughly 10 times greater for blacks than whites. A recent article in the Washington Post says that each year for every 1 million Americans, 15 whites die from gun homicides. For blacks the number is 151.

I still remember watching him move from slide to slide thinking, “When will this end?” There’s a giant problem here. Here’s a presentation of a statistic actually moved me.