By Tom Peterson on February 12, 2016 in Nonprofit Innovation, Social Change 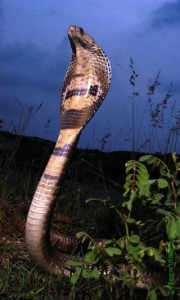 What could possibly go wrong?

The colonial British overlord in charge of Delhi, India, wanted to rid the area of venomous snakes so he offered a bounty for each cobra killed.

Everything has side effects: the medicines we take, the products we use— and an edict about deadly snakes. Some may be good, some bad. We should occasionally step back to see the unexpected effects of our work.

The Indians traded dead cobras for cash. All was going well, that is, until the British realized that people were actually raising snakes for the money. The program was immediately stopped. So what could the snake farmers with their thousands of cobras but release the into the wild? Now there were exponentially more than before.

This is known as the “cobra effect.” In trying to solve a problem, it’s made worse. Not to be out done, in Vietnam the French colonial powers paid for rat tails to lessen the rat population before they noticed all the rats running around with no tails.

History boasts a long string of unintended consequences. Famously, the American CIA nurtured a group resisting the Soviets in Afghanistan. That group, al Qaeda, lead by Osama Bin Laden later carried out the terrorist attack on the World Trade Center. Introducing non-native, invasive species is a great way to create poor consequences. Brought to Philadelphia for the Japanese pavilion for the 1876 Centennial Exhibition, kudzu now destroys the natural balance across southern states. Rabbits brought to Australia for hunting have created immense environmental problems. Asian carp and the zebra mussel have already disrupted ecosystems in North America and threaten to do more damage.

The prohibition of alcohol in the United States from 1920 to 1933 created a giant boost for organized crime. Similarly, the war on drugs contributed to the rise of vicious drug cartels, mass incarceration of young (especially minority) men, and a more permanent underclass.

Students of health care are taught to “first do no harm.” Don’t do anything to make the situation worse.

A great side effect

Sometimes side effects are a boon. For 19 years I went to see Heifer International’s work in other counties. The partner farmers were always eager to show off their llamas, dairy cows, goats or chickens. And they proudly showed us the farm improvements they’d made since they had joined the community group and received their animals.

These benefits came from more than the livestock. They came from being part of a community organization that shared ideas, encouraged each other. That, mixed with the farmers’ ingenuity and hard work, always resulted in a wide range of improvements. It would take a book to describe the many ways these people, living on the edge of poverty, improved their lives.

I’d walk around their farms with my note pad and camera. One question I’d always ask, usually through an interpreter, was “What’s the most valuable thing you get from these animals?” The predictable answer should be milk if they’d gotten a cow, or eggs with a chicken, wool with the llama. The family would have a steady source of good food. Or they could have answered that it’s the money they got from selling the product.

It took me a few years to realize that the most common answer was manure. Here we’d gone to all the trouble raise funds from generous donors, to staff up a team in a distant land who would work with a group for a year, find the animals get them there, do the trainings and so forth.

I could ask that question in a meeting room in China or sitting on a crude wooden bench in a round dirt-floored house in South Africa. The milk, meat, eggs, wool and money from sales were great. But so many were most happy about manure.

I suppose manure is not so much a side effect as it is rear effect. With the livestock these families who couldn’t afford commercial fertilizer (made of chemicals that would deplete their soil over time) now had on-site organic fertilizer factories. The manure brought dead soil to life. The farmers talked about doubling and tripling their vegetable yields. That’s life changing for a family living on a thin margin. They now had plenty to eat and sold vegetables in the market.

The manure helped make a community of poor farmers more stable. It was changing the world in these isolated areas.

Of course, manure has another side effect: gasses from livestock generate about 18 percent of greenhouse emissions. This is especially a result of the concentrated animal feeding operations, or CAFOs, that provide most of the meat, eggs and dairy products to Americans. Another unintended consequence.

But it turns out that manure used properly in small-scale farming described above is environmentally sound and contributes to a sustainable world.

Please don’t stop your good work and worry about every possible thing that could go wrong! Don’t live in fear that any action you take will create dire consequence.

But from time to time, find a way to step way back and ask what else is happening because of the work you’re doing. You may find a few unintended consequences. They may cause some harm. So you can find a way to do things differently. Or, like manure, you may discover some unexpected benefit that cries out to be further developed.

You may also enjoy Make Mistakes.