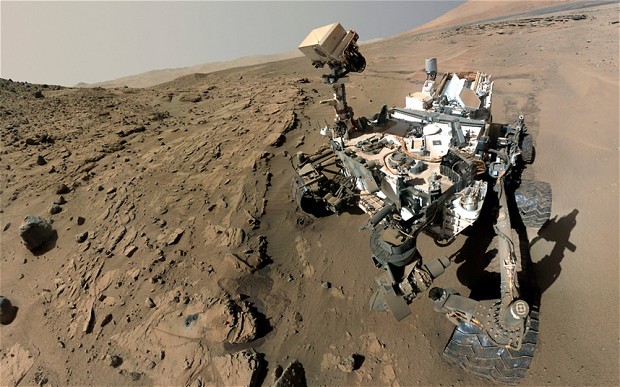 “I have no special talents. I am only passionately curious.” — Albert Einstein

The “rover” we earthlings sent to explore the next planet over was named through a contest by sixth-grader Clara Ma: Curiosity. But it was seven thousand adults who spent five years to make the mission happen. The $2.5 billion spacecraft launched from Florida in November 2011 and landed the next August on Mars.

Just landing the craft was an amazing engineering feat. A signal from Mars takes 14 minutes to reach earth, so onboard computers had to do all the work. In a make-or-break entry called “seven minutes of terror,” the craft slowed from 13,000 miles per hour to zero. Because anything slightly off would ruin the landing there was no room for error. As the spacecraft came into the thin atmosphere, it heated up to 1,600 degrees and deployed the largest supersonic parachute ever built. The craft then used its own rockets to slow it even more. And just 20 meters above the surface, to slow it further, Curiosity was lowered using tethers.

The landing was successful, and five years later Curiosity is still a working lab on wheels. It sends images, drills into the surface, cooks and analyzes rock samples, sniffs gasses, and so on. While it travelled 350 million miles to get to Mars, it has ventured only six miles on the planet, but in that short distance we’ve learned a great deal. Curiosity has found evidence of ancient riverbeds and lakebeds that tell us water once flowed on the planet. It has identified organic molecules, the building blocks of life. It’s found “burps of methane,” perhaps a sign of life or ancient life. And we know more about how humans could live on the planet—more discoveries to come!

So, what would happen if you applied to the world-change challenge you’re facing even a tiny smidgen of the curiosity that’s gone into the Mars mission? You don’t have $2.5 billion nor a staff or seven thousand, but you’ve got some resources, probably a lot more than you’d initially think. How would you start to discover improvements or even a breakthrough?

A baby emerges from the womb with deep curiosity. She looks around in wonder and sees her mother for the first time. She sees lights and trees, the clouds in the blue daytime sky, and stars and the moon in the dark night. She listens intently to the meow of a cat or a distant siren. As a toddler she pulls a leaf from a bush. She feels its texture in her fingers, looks at it, maybe even tastes it. In the beginning our curiosity is instinctual and unbound. Unfortunately, because it’s easier to rest on what we already know, over time we become less curious. We listen less, observe less and, consequently, discover less. But the good news is that curiosity is something we can strengthen and build into our daily habits.

Curiosity takes deliberate action. You may wonder what’s that new restaurant like? Who’s that person over there? Where does this path lead? Does asking these questions mean you’re curious? No, it just means you have some questions. When you’re curious you take steps to answer your questions: You eat at the restaurant, you go over and meet the new person, you follow the path. Curiosity is active, not passive. Some actions may look passive that are not. When you read a book or watch a documentary to understand something, you’re taking an action. It’s called learning and research. Thinking, ruminating, mulling on, contemplating are also all action verbs. But knowing is not.

“Around here, we don’t look backwards for very long,” said Walt Disney. “We keep moving forward, opening up new doors and doing new things because we’re curious… and curiosity keeps leading us down new paths.” If your challenge is complex, like sending a rover to Mars or solving a social need in your community, your curiosity will present hundreds or thousands of questions that need answers and new paths to explore. Even the simplest queries will lead you in unpredictable ways. But it’s up to you to take the steps. 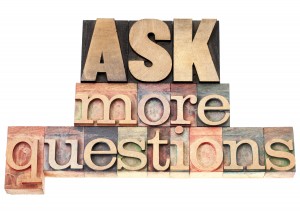 Have you ever been in a meeting where everybody’s been struggling with the same issue for hours, then someone says, “Maybe we’re not asking the right question.” It’s a comment to listen for. Asking a different question can be like opening the windows to let in fresh air. too often We focused on getting the right answer… but for the wrong question.

In his book Creativity Mihaly Csikszentmihalyi distinguishes between presented and discovered problems: 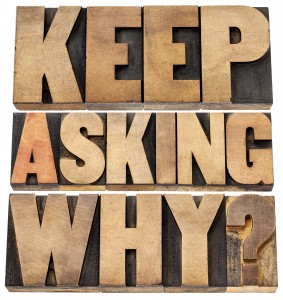 If you’ve ever worked at a homeless shelter or food pantry you’ve probably heard this metaphor: We’re like those rescuing people who are floating down a river, pulling them out and taking care of them. This is what we do every day in feeding programs, homeless shelters. In this metaphor, someone then asks, “Why are these people falling into the river in the first place?” So they go upstream to develop programs designed to keep people from falling into the river and needing rescue. These different question lead to different answers which lead to different programs.

Unlearn, forget what we know

If you already have an answer before you even know the questions, any chance of discovery is pre-doomed. You’re too smart for your own good. Ancient Greek philosopher Zeno said “The most necessary part of learning is unlearning our errors.” It’s not easy, but when you abandon your assumptions you open yourself to new possibilities.

In Five Minds for the Future Howard Gardner says that child prodigies rarely become true creators because from the earliest age they were rewarded “for doing precisely what the adults in their domain were doing.” It’s hard for them to shift to creativity. “A wit said of Camille Saint Saëns, an aging musical prodigy who never fully realized his early promise: ‘He has everything but he lacks inexperience.’” Gardner continues:

The “grown-ups” in your field have probably already stated the questions you are supposed to find answers to. For example, most nonprofit marketer/fundraisers focus on the same questions: How do we increase our response rate, renewal rate, click-through rate, average gift size? How do we expand our audience? How do we acquire new donors? Entire armies of staff professionals and consultants look for answers to these questions. Don’t get me wrong, the incremental improvements from these pursuits are not bad. They may be the best way to grow. But isn’t there another way to frame your question? Is there a completely different question?

Our brain tends to examine the known models, things we’ve see work before. We try to think how to tinker with that model to make it work for us or to work better. But for a true breakthrough, “maybe we’re not asking the right questions.”

How can we expand our program with no more money? Could our program be paid for by those who benefit? Is there a completely different model to accomplish the goal? Is our goal really a good one? Is there a business model in an entirely different field that could work here? If we needed 10 times the funds in just one year, how would we get it?

So what are you working on? Who’s doing something similar that’s really cool? Are you frequently reading about your field online in books or in magazines? Are you asking others for their ideas? Are you part of a learning network? What’s not yet known?

Stephen King says we have two options: “We continue to learn or we dig a rut and furnish it.” So build the habits of curiosity. Relentlessly ask questions, especially why. Get a yellow pad and interview a bunch of people. Unlearn, set aside pre-judgements. Ask how things work, how they connect. Be open to the unexpected. Listen, listen, listen. Observe. Watch for the new, the surprising, the oddity. Investigate. Look for answers to questions no one else is asking.

Blessed are the curious for they shall find treasures. And their wanderings will be interesting.

NASA image of Curiosity is a selfie made of a compilation of photos.

View all posts by Tom Peterson →
Yes I Can! We’re the Super Humans
The Religion Wheel: How is “religion” both good and bad?