By Tom Peterson on February 27, 2018 in nonprofit marketing, world changing 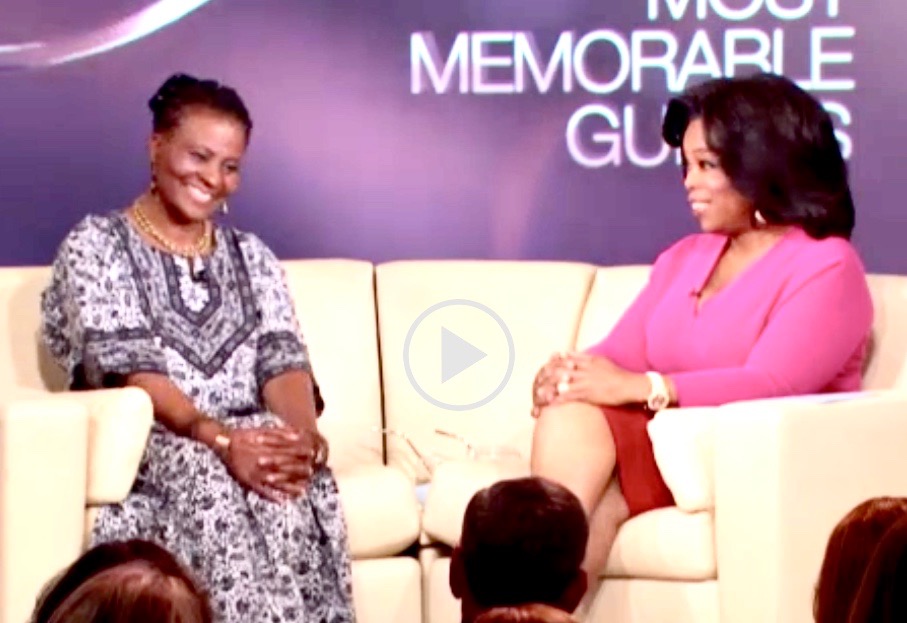 How one guy’s simple goal, and one woman’s determination led to Oprah’s “all-time favorite guest”

Ray White’s 30-year journalism career and passion for the cause made him a great, though unassuming, leader of public relations much of the time I was at Heifer International. While the team was small—Ray, an associate, and some help from a two-person agency in Dallas—their work yielded fantastic publicity year after year.

A simple goal, plus three years

One day, Ray told me “We want to reach out to Nicholas Kristof. He’s the most likely to understand what we’re doing. Let’s see if we can get his attention.” A Pulitzer Prize winning author and highly respected New York Times columnist, Kristof had been covering poverty and international issues, often from war zones and places of desperate poverty like Sudan, with a distinct bias toward real, on-the-ground people. Well, it turns out that everybody and their dog was also trying to get his attention. So, how was that going to happen?

Ray knew that journalists like to tell stories that also relate political and social narratives. He called Kristof’s assistant, Winter Miller, and gave her the brief Heifer spiel. And the next time he went to New York he arranged to meet with her in the company cafeteria. “She became more and more interested as we talked because Heifer’s program is unlike anything else,” says Ray. “A cow or a goat is a wonderful thing to give to someone because it can reproduce and that means that the person who gets the animal can pass on a gift of another animal like they got to someone else. So it spreads throughout the community.” 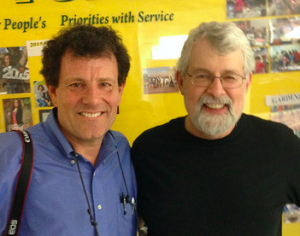 One day, Ray (at right) heard from Kristof (left); he was interested. “I was astounded,” he says. They emailed back and forth for a while and then Kristof let Ray know he was giving a speech in Dallas and invited him to meet. “So I went to Dallas and with Christine Volkmer, who led that small ad agency that helped Heifer, went up to his hotel room after his speech and just sat around and talked about Heifer. We told him a number of stories.”

In July 2008 Kristoff ran a column about a Heifer program recipient in Uganda, a girl named Beatrice whose family received the gift of some goats that enabled her to go to school—and changed her life.

From the time Ray’s set his Nicholas Kristof goal to that column was three years. You never know where an intention will lead. You may get there, you may not. Or it could be the beginning of a long and improbable journey.

Tererai, what are your dreams? 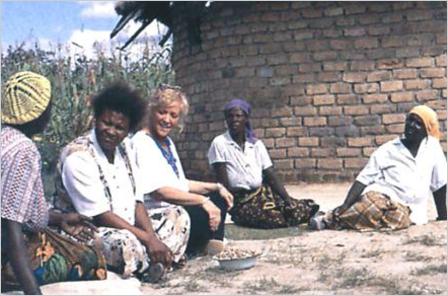 1991 Jo Luck, then head of Heifer International, was sitting in a circle of women in a remote village in Zimbabwe. She asked them each to share the answer to this question, “What are your dreams for the future?” When it came her turn, a woman named Tererai said, “I’m a poor woman living in Africa, I’ve got five kids, I can’t have a dream.” (Remarkably, someone captured this meeting in a photo. Jo Luck is in the center and Tererai Trent is to her right.)

Jo Luck pressed and asked, “If you could have a dream what would it be?” Tererai responded: to get an education. So, Jo Luck answered back, “If you believe in your dreams, they are achievable.” Tinogona, “It is achievable.”

Tererai had grown up in a poor cattle-herding family and was married off as an 11-year-old girl. But she had taught herself to read. Now with tinogona her watchword, she decided that her dreams were to study in the United States, get a bachelor’s degree, then a masters and, finally, a Ph.D. She wrote these down, a check list. She wrapped them in plastic, placed them in a can and buried it under a rock.

She began by working on her elementary school education. Then she got a GRE certificate. This determined woman attracted the attention of the Heifer staff in her area. She was encouraged to go further and received a scholarship to go to Oklahoma State University. Her mother sold a cow and other villagers sold small livestock to help send Tererai and her family to the United States.

It never came easy in Oklahoma either. At times she was so destitute she resorted to getting food from the trash. Some kind people in the university community rallied to help her. Tererai pressed on and earned her bachelor’s degree.

And then her masters.

And finally, she began working on her Ph.D. at Western Michigan University. Meanwhile, she ended up working at Heifer’s headquarters in Little Rock, where I got to know her.

We could educate them all

Then Ray White’s gentle persistence paid off again. He had been telling Nicholas Kristof about Tererai, and in 2009 Kristof wrote a second column on Heifer, this time on this remarkable woman. It began, “Any time anyone tells you that a dream is impossible, any time you’re discouraged by impossible challenges, just mutter this mantra: Tererai Trent.” Of course, he set her story in the context of global priorities:

Tererai is a reminder of the adage that talent is universal, while opportunity is not. There are still 75 million children who are not attending primary school around the world. We could educate them all for far less than the cost of the proposed military “surge” in Afghanistan.

Each time Tererai accomplished one of those goals that she had written long ago, she checked it off on that old, worn paper. Last month, she ticked off the very last goal, after successfully defending her dissertation. She’ll receive her Ph.D next month, and so a one-time impoverished cattle-herd from Zimbabwe with less than a year of elementary school education will don academic robes and become Dr. Tererai Trent.

Later, Kristof and his wife, Sheryl WuDunn, included her story in their book Half the Sky.

Then one day, Ray got a call from a producer of the Oprah Winfrey show. Now, Heifer had already been featured on the show a couple of times, but the piece in Half the Sky had captured their attention again, and the producer told Ray they were interested in doing Tererai’s story. “They were actually 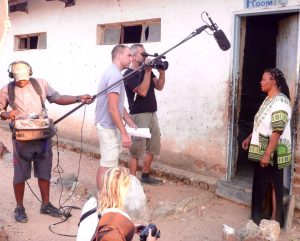 So they were all off to Zimbabwe. “We’re driving up near the Zambezi River to shoot the story in three or four vehicles because they carry a lot of equipment,” recalls Ray. “We stopped in a field near the village and we heard drums announcing our arrival.” They pulled into the village and met everybody, including Tererai’s mother, a true supporter and encourager. The show aired in 2009.

So great that in 2011 when Oprah hosted her final show, she invited Tererai and named her the “all-time favorite guest.” Tererai spoke of the unbelievable feeling of walking across the stage to receive her doctorate. 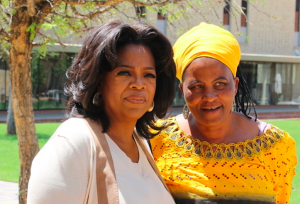 When Oprah asked of her current dream, Tererai expressed the need to give back to the thousands and millions of girls not getting education so they don’t have to go through she went through. At that point, Oprah announced to her that she was donating $1.5 million so Tererai could rebuild her childhood elementary school in northern Zimbabwe. Today, through the organization founded by Dr. Tererai Trent, along with Save the Children, more than 5,000 children have received education from 11 schools.

This short ramble is about of a lot of remarkable people, each finding their own way to move us toward life. It’s about a leader (for almost two decades my boss) who found it important to sit in a circle with women most would overlook and to ask what’s important in their lives. It’s about an affable and persistent PR guy who gave a damn. And it’s about journalists, truth tellers, who do their best to shine a light on the real world. And a woman who has spent her remarkable career and celebrity doing the same. And it’s about the countless groups and individuals who helped and encouraged in so many ways.

All of their lives brush up against improbability.

Finally, it’s about a woman who believed that It is achievable! And is now passing on the gift by infusing tinogona to thousands of young people in her own northern Zimbabwe.

Review: Design Thinking for the Greater Good
Nonprofit Rate = free money for your cause

2 Responses to Tererai, the improbable story of Oprah’s “favorite guest”