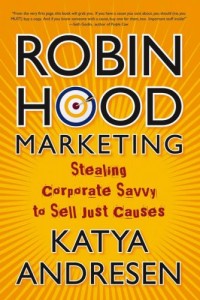 For five years I’ve taught a class on Nonprofit Marketing at the Clinton School of Public Service in Little Rock. And every year, it’s one of the most rewarding things I do—because of the students. Besides their brilliance, they’re motivated to serve and improve their world. In fact, when they come into this masters program  from around the world, they’ve already been serving humankind in some fashion.

Their main assignment is to create a marketing plan, typically for a small-to-midsized nonprofit (usually one they’re already involved with). From reading the books below and the ramblings from myself and a few marketing friends, they are able to create plans that will absolutely move their causes forward.

We’ve used two books, and if you have anything to do with marketing your organization, you’ll want both. The first is Katya Andresen’s Robin Hood Marketing: Stealing Corporate Savvy to Sell Just Causes. In the spirit of Robin Hood, the book is about “stealing corporate know-how and applying it to good causes.” Andresen explains ten proven marketing principles—such as get people to do something specific, create a strong competitive position—and walks you through how to use each one to help your cause.

Andresen tells great stories to back each idea and includes interviews with people who have mastered each principle. She often speaks from her own experience. To illustrate the principle that we should appeal to our audiences’ values, and not our own, she gives this example from the Ukraine:

A small organization… was working to motivate apathetic teenagers to care about politics, the future of the country, and voting. The group was frustrated because its message wasn’t getting through to this tough audience. So it attended a marketing training. At the session I asked them what there were telling teenagers. “We’re telling them about our organization and how they should care about the future of the country,” the twenty-seven-year-old director of the organization said. “If they vote, they can have a brighter future.”

He was only 27, but he was already too old to instinctually think like a teenager. Eastern European teenagers aren’t that different from American teenagers: they don’t focus on the distant future, and they end to be cynical. Promising a better country or a brighter future isn’t exciting to them. The organization’s director and I talked about what teenagers did value, based on his informal research and work with them. What interested them? What got under their skin? He said his staff and volunteers always talked about Ukrainian teenagers as cynical and somewhat rebellions. Teenagers were especially tired of lecturing from their babushkas (grandmothers).  What did the country’s babushkas want? “They want things to be the way they used to be in Soviet times, with a good pension system. And they don’t like the way young people dress and act. Teenagers don’t agree, of course.”

…We talked about how to change his marketing approach according to these insights. He ended up making a slight change in his message that made an enormous difference in its meaning. The new approach (in rough translation): “You decide your future, or your babushka will do it for you. Vote on October 31.” Because of the work of hundreds of such organizations and an increasingly involved and engaged citizenry, some 80 percent of Ukrainians went to the polls during that historic 2004 election. Plenty of babushkas were at the polls, but so were many young people.

But the book Robin Hood Marketing is just part of Andresen’s offerings; Katya’s Nonprofit Marketing Blog is one of my favorites. Go there often for practical ideas and for inspiration.