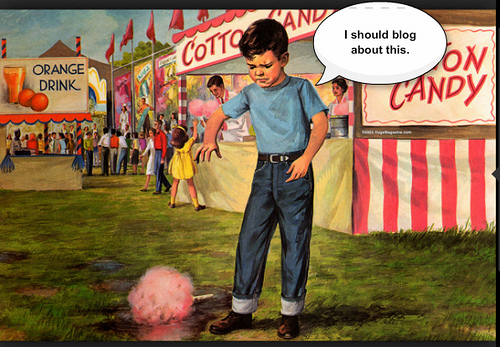 Step right up to April’s Nonprofit Blog Carnival, hosted by Katya Andresen, who chose the theme What’s the Best Advice you’ve received. More than two dozen folks share their wisdom. I liked number nine: Ask for Help. That’s something most of us could allow ourselves to do more of.

This week the 17th annual Webby Award winners were announced. The Best Charitable Organizations/Non-Profit went to DoSomething.org. And Change.org won the people’s voice for best in Activism.

Crowdfunding is expected to grow to more than $5 billion this year according to a new report cited in a Fast Company article. Last year, more than 1 million efforts raised $2.7 billion, according to the article. “… if you thought the future of crowdfunding was all about dinky video game pitches, and cheerful perks on Kickstarter, you’d be missing something. Going forward, crowdfunding is likely to take on many forms, be more geographically-diverse, and, for better and worse, look more like big-time investing.” Dowser lists 10 New Platforms for crowdfunding. And Huffington Post offers an overview of crowdfunding for social justice.

“Those who make us believe that anything’s possible and fire our imagination over the long haul, are often the ones who have survived the bleakest of circumstances. The men and women who have every reason to despair, but don’t, may have the most to teach us, not only about how to hold true to our beliefs, but about how such a life can bring about seemingly impossible social change. ” — Paul Rogat Loeb, in The Impossible Will Take a Little While

If you see a social change innovation, a nonprofit how-to or just something cool that’s changing our world, please pass it on: tom@thunderheadworks.com

Why Climate Change is Not an Environmental Issue
Engaging Millennials